Adversaries Combat and Skill tree - How I wished it was :) 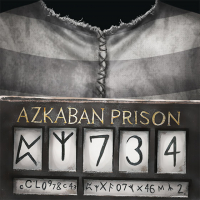 To inflict damage, we have to trace spells. Each offense spell fills a small bar (orange bar, left side), used to unlock a powerful spell. The powerful spell is different for each profession:

*To cast this new spell, the player has to track the (easier) aim icon, underneath the enemy. This icon only appears once the bar is full (bar cannot stack spells, has to be used and then refilled).

As the players, enemies also have a strong attack. Normal attacks will inflict a nice amount of damage and can be dodged, but strong attacks cannot be dodged, only have the damage mitigated by Protego and Protego Maxima.

This style opens a lot of ways for a refined skill tree. Square nodes are upgrades for the 2 new Spells (Strong + Defense) and used as main nodes, like in the SOS skill tree. The skill tree will be the same for all players, changing only the Powerful Spell aspect.

- Reduce the number of spells for Powerfull spell by 1.

- Reduce the number of spells for Protego Maxima by 1.

- Normal nodes as we have for now (+dodge chance, +critical hit chance).

I also wanted to let clear that I'm very happy with this new content. The team keeps releasing amazing updates, making the game even better! For this new feature, the points I really liked are:

Chain of encounters / Doesn't need other players (In my community, all wizards/witches are retired, so I'm running solo) / DADA books and Dark Mark as rewards.

Now, about the combat and skills tree... I wished it was a bit different from the usual combat style.

Have a nice day,

*Ps: Dark Marks are a bit overpriced! Waiting for my non-Muggle discount 😁